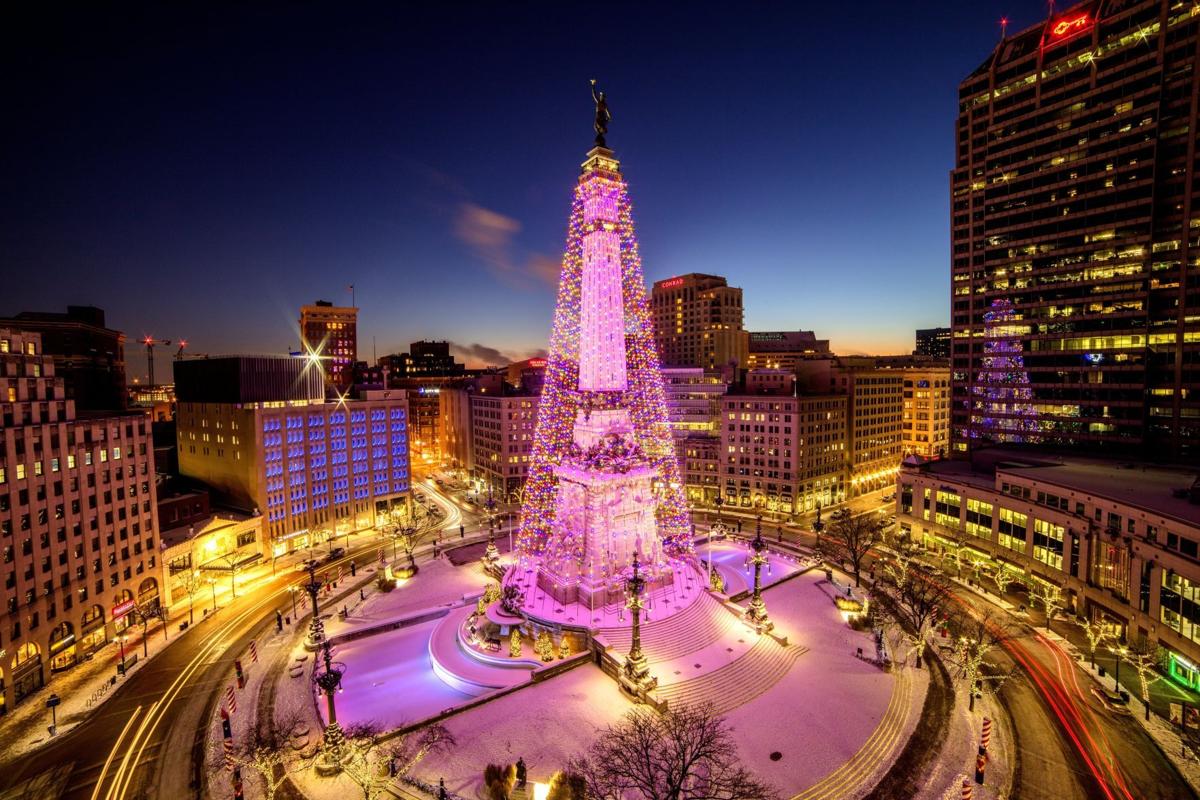 The 284-foot-tall Solders and Sailors Monument in the heart of Indy’s downtown is billed as the “largest Christmas tree in the world” during the holiday season. 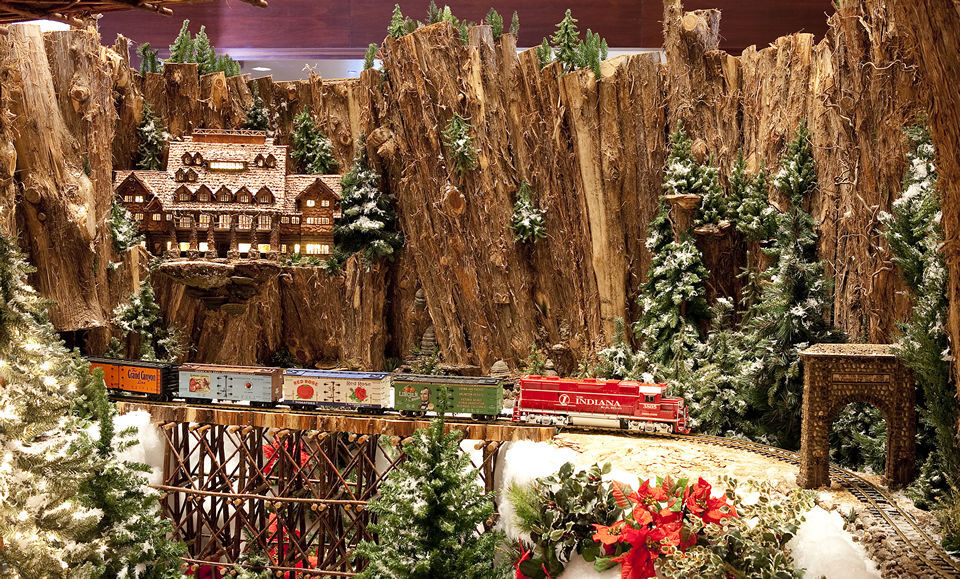 Jingle Rails is the G-scale model train at the Eiteljorg Museum in Indianapolis decked out for the holidays. 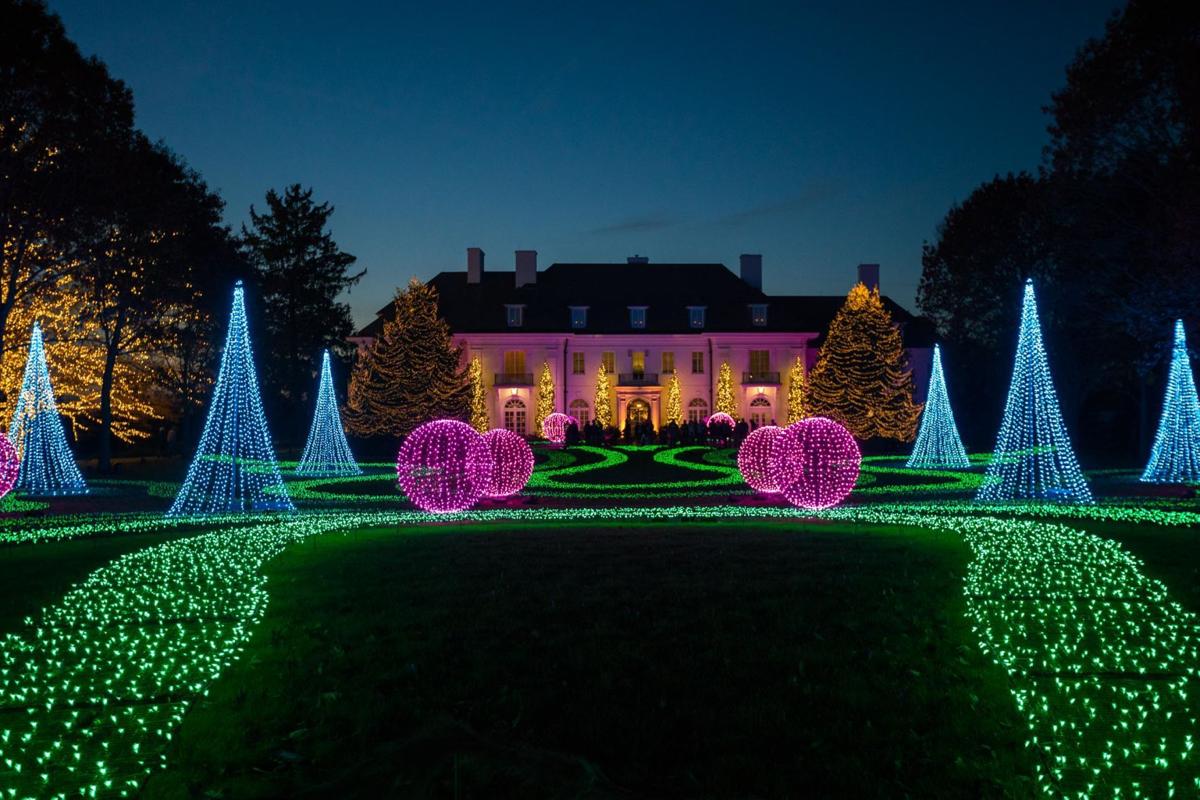 Newfields is decorated for its Winterlights program during the holidays.

During this holiday season, Indianapolis rocks with myriad events, including the world’s largest Christmas tree, a visit to the first zoo in the country to feature holiday lights, a 35-minute interactive music-and-light driving experience at the Indiana State Fairgrounds  and a historic homestead celebrating Christmas Eve like it’s still 1800 or so.

Oh, and did we mention a performance by the Trans-Siberian Orchestra, the 25th annual Jingle Train and an old-fashioned European Christkindlmarkt in Carmel, where this year’s Glühwein mug shipped in from Germany is a light blue.

Really, who could ask for anything more? So, let’s go.

OK, so it really isn’t a tree, but the 284-foot-tall Solders and Sailors Monument in the heart of Indy’s downtown is billed as the “largest Christmas tree in the world,” and we tend to believe it. Named by Travelocity as one of the top five must-see Christmas trees in the nation, the monument, swathed to the top in strings of lights that create the structure of a tree, goes beyond all that, becoming a light and audio show while the circle itself is turned into a life-sized snow globe.

The Christmas Nights of Lights at the Indiana State Fairgrounds, Indy’s largest synchronized music and light event, is a 35-minute drive-through experience featuring more than a million lights twinkling along to both traditional and more current holiday music synced through your car’s stereo system.

The Indianapolis Zoo was the first ever in the U.S. to host a holiday lights event, dating back to 1967. Yes, that’s true, at one time there weren’t Christmas lights blazing everywhere. What a dark time that must have been for those of us who are awed by anything that glimmers and glows.

Now, nominated for the seventh year in a row for USA Today’s 10 Best Zoo Lights, the Indianapolis Zoo’s Christmas at the Zoo year has grown into a much larger event.

In Santa’s Village, visitors get the opportunity to meet Mrs. Claus in her kitchen, join in a penguin encounter, see reindeer and Santa’s Sleigh in Santa’s Barn, visit Kris Kringle in Santa’s Study, hang with Vacation Santa and his flamingos at Flights of Fancy and spot the Jolly Old Elf.

There’s also the Polar Pathway, a brilliantly illuminated tunnel, and, for adults, the Tinsel Tavern is serving holiday-themed cocktails made with spirits distilled by Hotel Tango.

Celebration Crossing at the Indiana State Museum in downtown Indy offers the chance to visit reindeer in the Reindeer Barn, take a ride on the Snowball Express and visit with Santa at the holiday lunch buffet in the museum’s L.S. Ayres Tea Room, a down-to-the-very last detail replica of this once favorite gathering spot at the flagship L.S. Ayres department store in downtown Indianapolis. For those of us from Northwest Indiana, think the equivalent of the Walnut Room at Marshall Field’s.

The recreation includes carpeting, chairs and table settings, chandeliers, wallpaper and window treatments, as well as the foods served back then.

Newfields, an exploration of nature and the arts on a 152-acre campus, is home to the historic Lilly House, The Virginia B. Fairbanks Art & Nature Park, the Gardens at Newfields, the Madeline Elder Conservatory and Beer Garden and the Indianapolis Museum of Art, the ninth oldest and eighth largest encyclopedic art museum in the United States. It goes all out for the Winterlights at Newfields.

The extravaganza of 1.5 million lights includes the Ice Storm Walk, Winter Market, where snacks and drinks as well as holiday goods are sold, and Landscape of Light in front of the Lilly mansion. The latter, a 22-room mansion built around 1910, has been historically restored to represent the 1930s, when the Lilly family purchased the home, which is open for tours. This year’s light show is a curated, projection-mapped rock show by Huckleberry Funk.

Never to be missed, Jingle Rails, the G-scale model train at the Eiteljorg Museum of American Indians and Western Art in Indianapolis’s White River State Park, is a 1,200 foot tour of Indy, including such noted landmarks as Monument Circle, Union Station, Lucas Oil Stadium and the museum itself before heading west, chugging through national parks including those great railway lodges and such natural wonders as Old Faithful, which actually erupts, Yosemite Falls and the Hoover Dam and Las Vegas Strip.

A new scene was added this year — that of San Francisco with its hills, coastline, and such famed destinations as Fisherman’s Warf. Take time for a family photo with a nearly life-size train engine model that’s made of all-natural materials.

Carolers in early 19th century garb, music at Blitzen’s Bandstand, riding Kringle’s Carousel, tubing down the 150-foot Polar Bear Plunge hill and meeting Santa and Mrs. Claus and their elves while they get ready for their special deliveries can only mean one thing. It’s the annual Merry Prairie Holiday at Conner Prairie where the traditions of nearly two centuries ago get revved up with skating on the sock-only rink and the 3D projection of “T’was the Night before Christmas” on the William Conner Home.

If you’re into holiday trees, check out the 75 decorated trees based on the theme “Back Home Again” at the Indiana Historical Society’s Eugene and Marilyn Glick Indiana History Center, located on the canal in Indy’s downtown. The building itself, with its lofty ceilings, large windows and historic displays, is the perfect place to display the trees, each unique including some created from atypical materials and others with a fun take.

Take part in the center’s old fashioned scavenger hunts to find The Elf on the Shelf, the opportunity to vote for your favorite tree, holiday music in the Cole Porter Room, snacks at the Stardust Terrace Café, holiday shopping at The Basile History Market, and Twilight Tuesday, an after hours display of the trees at night.

If you can’t make it for the event, take advantage of the opportunity to view it indianahistory.org/events/festival-of-trees/.

The Children’s Museum of Indianapolis, the world’s largest children’s museum, always has a lengthy list of activities and this year is no different. What’s up? Well, just as a start there’s Celebrate the Holidays with Santa’s Jolly Days Team, A Taste of the Holidays for sharing baking stories and memories complete with a recipe to take home, The Mistletoes Family and Friends Reunion, Snow Forts: Building Block Battle, and The Christmas Quest — a show exploring how Old Saint Nick became Santa.

For more information call the Indianapolis Visitor’s Center at 317-262-3000 or www.visitindy.com/.