The purported new Intel Arc Alchemist graphics card has been spotted again, this time running on the Ashes of the Singularity benchmark. This is interesting, as it might have something to do with what we’ll see from Intel at CES 2022.

The system was powered by Intel’s new flagship Core i9-12900K processor, with what would be an engineering sample of the Xe-HPG DG2 GPU aka Intel Arc Alchemist a320. Intel’s new Arc Alchemist graphics card was benchmarked at 1080p on the Medium preset, scoring 12,500 points and an average of 126.9FPS.

We recently saw Intel’s upcoming Arc Alchemist flagship GPU on Geekbench’s benchmark database, and now again with Ashes of the Singularity. How I’d kill for some Warzone numbers, some Cyberpunk 2077 numbers… something juicy. 3DMark results? I’m dying to see how Intel debuts their Arc Alchemist family of GPUs in 2022. 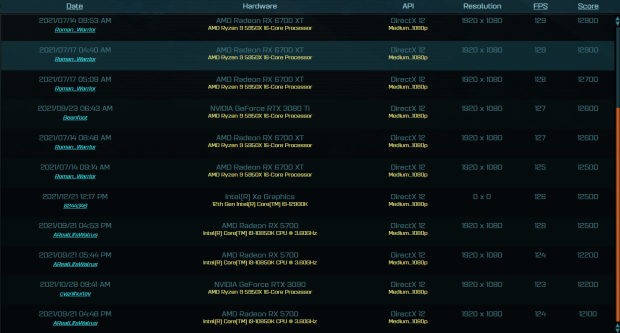