At the war’s end, residents of Marja are growing increasingly desperate for any kind of help, a frustration that has turned to anger that the international community has seemingly abandoned them.

MARJA, Afghanistan — Haji Rozi Khan stood outside the gate of the bullet-pocked building that housed the Marja district’s government offices, staring through the slotted steel door into the compound. Taliban guards stared back. They were not who he was looking for.

Mr. Khan had trekked to Marja’s district center in Helmand Province from his village several miles away by motorbike, kicking up powdered dust as he navigated the unpaved roads, long damaged by the war. He was searching for a figure who had been even more elusive since the Taliban took power in August: an aid worker.

“We have nothing to eat,” he said in an interview last month.

Once, Marja was the site of one of the biggest battles of the two-decade war, part of the United States’ counterinsurgency campaign to weaken the Taliban and build up a local government. But today, the grid-like patch of mud-walled hamlets and canals looks much as it did at the outset of the invasion in 2001: barely navigable roads, understaffed and damaged schools and clinics and withered crops, crippled by one of the worst droughts in decades.

As Afghanistan sinks deeper into a humanitarian crisis, Marja’s residents are still caught in the war’s aftershocks. Amid a crashing economy and ruined harvests, in a place where most people barely live above the poverty line, many are just now realizing how dependent they were on foreign aid, their lifeline for 20 years, which was cut off practically overnight. They’re growing increasingly desperate for help, a frustration that has morphed into anger that the international community has seemingly abandoned them. 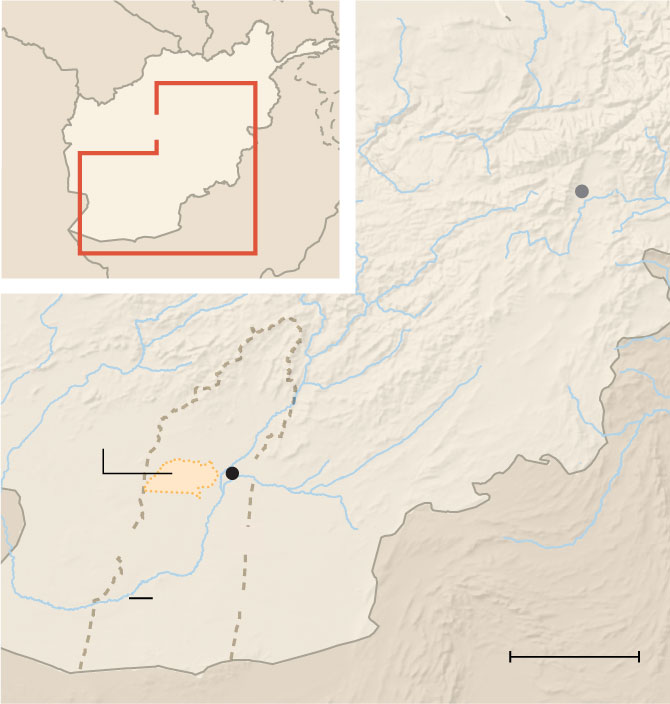 Marja residents are also coming to terms with a new Taliban government that may have brought peace, but with dwindling cash and the squelching of foreign aid has been able to deliver on little else.

“The government isn’t able to help themselves and we’re not able to help ourselves,” Mr. Khan said as a small group of farmers gathered outside the district center to voice similar complaints to the local government.

It is a tragic but almost inevitable turn for a district in southern Afghanistan that has since become emblematic of the multi-trillion-dollar nation-building effort by the West that crumbled even before the Americans fully withdrew from the country in August. Many in Marja were happy to see the foreign occupation end and the Taliban take power, because it brought stability to the region after years of fighting that took countless civilian lives and wrought widespread destruction.

Mr. Khan had lived for nearly 30 years at the edge of Marja, where he grew wheat, cotton and corn until his crop was battered last year by the drought. That same year, his nephew was killed by a roadside bomb.

This year’s turmoil has been deepened by the arrival of roughly 20 displaced families from central Afghanistan. They were hungry and homeless, he said, so he gave them what little food he could spare before making his way to the district center in hopes of finding someone else who could help.

“We are so tired,” Mr. Khan said, his blue shalwar kameez flapping in the morning breeze.

In recent weeks, the United States and the European Union have pledged to provide $1.29 billion more in aid to Afghanistan. The World Bank’s board moved in late November to free up $280 million in frozen donor funding, but U.S. sanctions against the Taliban continue to make it extremely difficult for aid organizations to get money into the country.

Aside from the sanctions, the Taliban government’s inability to provide for its people also stems from its inexperience in governance, which was clearly illustrated in a visit to the district office in Marja.

Inside the squat government building that was refurbished by the Americans a decade ago and nearly destroyed by fighting in the decade since, sat Mullah Abdul Salam Hussaini, 37, Marja’s district governor. The newly appointed local leader had spent the better part of the last 20 years — essentially his entire adulthood — trying to kill U.S. and NATO forces as a Taliban fighter.

Now he found himself governing a district of around 80,000 people mired in crisis, with little in the way of funds, infrastructure or public-service experience to support his constituents.

People lined up at the compound gates with a litany of complaints and requests: Do something about the displaced refugees; build a new health clinic; help farmers whose crops were destroyed; find more teachers for what may be the only remaining school in Marja.

“Whatever people ask, I am asking that, too, because we are not in a situation to do it ourselves,” Mr. Hussaini said quietly, surrounded by Talibs who looked far more comfortable behind a rifle than a desk. “We need the help of foreigners because they did it before and we’re asking them to do it again.”

Inside the governor’s dimly lit office, walls and window sill adorned with Kalashnikov rifles and other weapons captured from the previous government, sat a representative from a local aid group who had come to survey the district and its food needs for the World Food Program. The organization is still distributing basic food staples, but the rising demand has far exceeded their supplies.

For years, the insurgent group controlled pockets of Afghanistan and fueled a shadow economy by leeching off the previous government’s foreign-filled coffers through taxes on everyone in their territory, including truck drivers and aid workers. But those sorts of activities cannot make up for the loss of outside help.

“The Taliban don’t seem to have had a sense of how dependent the economy was on foreign support, which they benefited from as did everyone else,” said Kate Clark, the co-director of Afghanistan Analysts Network. “Even under the areas under Taliban control they weren’t funding the schools and the clinics.”

Marja, a district long reliant on growing poppy for its own illicit economy that the Taliban also taxed, was built by the United States in the late 1950s and 1960s as an agricultural project that diverted water from the Helmand River into a series of distinct grids.

In 2010, during the height of President Barack Obama’s troop surge, thousands of Western and Afghan troops secured the network of canals and fields in a major military offensive and then made promises of roads, schools and a functioning local government. Considered the last Taliban stronghold in central Helmand, Marja was a strategically important district in the eyes of military planners, who decided a victory there would be crucial to Mr. Obama’s new counterinsurgency strategy.

The Koru Chareh bazaar, a cluster of shoddy low-slung, steel-door shops, was where some of the first American troops arrived in 2010. “They came at night,” recalled Abdul Kabir, a young shopkeeper who was 9 when the first helicopters landed nearby.

As a boy, he watched as the Marines in desert tan uniforms walked by, saying nothing to him.

But this November, the only visible signs of the Americans’ occupation was a “Trump 2020 Keep America Great” flag draped from a shopkeeper’s peanut stand and a Confederate battle flag hanging from a shed nearby. A paved road that bisects Marja from north to south is arguably the most prominent American piece of infrastructure in the district, built as part of the more than $4 billion in stabilization funds that the United States poured into the country.

“It’s good the fighting is over,” Mr. Kabir said, standing next to his money exchange stand, where he focused on changing afghanis into Pakistani rupees. Few people ambled by. He had lived in Marja his whole life, an arc that followed the entire U.S. occupation.

Mr. Kabir was one of several residents who praised the security situation but lamented the economic downturn. “There is no money and everything is expensive,” he added.

With fluctuating border restrictions, higher import costs and a cash shortage, basic products in the bazaar, such as cooking oil, are three times as expensive as they once were.

To the vendors, who have distinct memories of fighting outside their homes, and explosions and gunshots that killed their friends, the economic crunch and the United States’ unwillingness to recognize the Taliban feel like punishments against them, not the new government.

Ali Mohammed, 27, who runs a chicken stand at the main intersection of the bazaar, has carried the weight of the war for years. He watched as a friend was gunned down by the Americans in a field just a few hundred yards from where he now sells his underfed birds. To him, his country’s situation was simply a new phase of the conflict.

“The foreigners say they are not here anymore,” he said. “But they didn’t finish the war against us.”