An evacuation corridor had been agreed with the Russians for the besieged Ukrainian port city of Mariupol, Ukrainian officials said Thursday.

The Ukrainian side received a message through the International Committee of the Red Cross confirming Russian readiness to open a “humanitarian corridor” from Mariupol through the city of Berdiansk, Ukrainian Deputy Prime Minister Iryna Vereshchuk said in a statement on Telegram.

“On the route to Mariupol we are sending 45 buses,” she said. “28 buses have to get a permit to pass through the Russian checkpoint in Vasylivka. Also, 17 buses have already left Zaporizhzhia. We will do everything possible to ensure that buses arrive in Mariupol today and pick up people who haven’t yet been able to leave the city.”

Ukrainian officials say around 90% of the buildings in the city have been damaged or left uninhabitable after weeks of intensive bombardment by Russian forces.

Additional corridors had been agreed for delivery of humanitarian aid and evacuation of people from the city of Melitopol, Vereshchuk said, and for a column of people in private vehicles to leave the city of Enerhodar for Zaporizhzhia.

“Our military has fully confirmed and guarantees a full ceasefire,” Vereshchuk said. “So at 9 a.m. we start the evacuation. ”

Russian forces may be regrouping in Belarus, the Ukrainian General Staff said in a statement Thursday.

The movement of Russian military equipment had been observed in Belarus, “probably for regrouping units, as well as creating a reserve to replenish losses in manpower, weapons and equipment of groups operating in Ukraine,” the statement said.

Ukrainian forces had noted “frequent cases” of mines being laid in areas recently retaken by Russian forces in the Kyiv region, the statement added.

Some information: The United Kingdom Ministry of Defence said in an intelligence update Wednesday that some Russian units had returned to Belarus after suffering heavy battlefield losses in Ukraine. Belarus has been a base and staging area for Russian military forces.

US Pentagon press secretary John Kirby said Wednesday the US had seen approximately 20% of Russia’s forces moving against Kyiv “repositioning,” with some heading to Belarus.

On Wednesday, Lavrov met with Chinese Foreign Minister Wang Yi in Tunxi. In a photo released by the Russian ministry, the two were shown wearing masks and greeting each other by bumping elbows.

A top Russian official announced an evacuation corridor will open Thursday morning from the besieged Ukrainian city of Mariupol, according to Russian state news agency TASS.

The corridor from Mariupol to Zaporizhzhia will open at 10:00 a.m. local time, according to Colonel-General Mikhail Mizintsev, head of Russia’s National Defense Management Center. A stop in nearby Berdyansk will be made along the way.

Russian forces — as well as the forces of the so-called Donetsk and Luhansk People’s Republics — will suspend the use of weapons, including those outlined by Ukraine, the general said.

Some background: Ukrainian officials have accused Russians of preventing humanitarian convoys from safely approaching or exiting the city, even shelling evacuation and humanitarian routes.

“Not everything is in our power,” Boichenko said Monday in a live television interview. “Unfortunately, we are in the hands of the occupiers today.”

Weeks of heavy bombing and shelling have left the southern coastal city in pieces, leaving an unknown number of civilians dead and forcing hundreds of thousands of residents from their homes.

Some 90% of residential buildings in the city are damaged, according to data released by Ukrainian officials. Of those buildings, 60% were hit directly and 40% were destroyed. 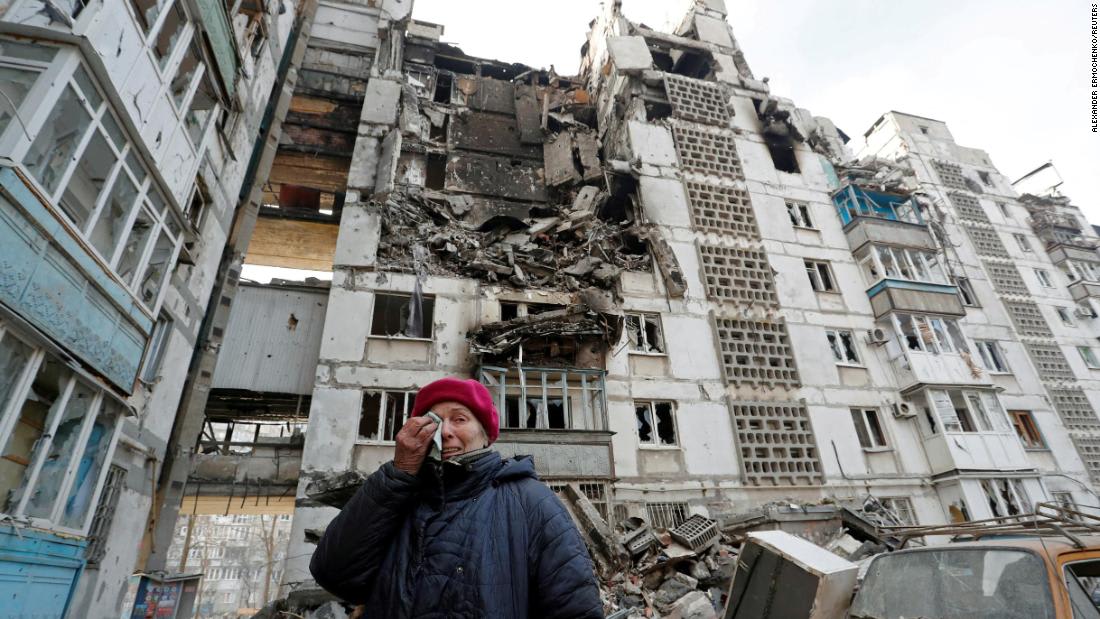 Russian forces bombarded Kyiv and Chernihiv Wednesday — a day after Moscow said it would “drastically reduce” its military assault on the two cities.

Here are the latest developments in the war on Ukraine:

The US government is “confident in” the assessment that Russian President Vladimir Putin has been misinformed by his advisers about their military’s performance in Ukraine, according to a senior State Department official.

On Wednesday, the US revealed declassified intelligence showing that Putin has been misinformed by his own advisers.

“There’s only so much we can say about where this information is derived from,” the official said, declining to provide additional details on the intelligence. He explained it was necessary to protect sources and methods.

“Putin clearly seems to have thought that he could go into Ukraine, that his forces wouldn’t meet resistance, that they would be greeted warmly including in Russian speaking parts of Ukraine, that he would be able to take Kyiv in a matter of 48, 72 hours,” the official said.
“Every single element that he seems to have believed turns out to be wrong. So, whether his advisers weren’t giving him the full unvarnished truth, whether he wasn’t listening, you know … I think we’ve seen this every step of the way.”

Speaking on a visit to Morocco, US Secretary of State Antony Blinken said: “One of the Achilles’ heels of autocracies is that you don’t have people in those systems who speak truth to power or who have the ability to speak truth to power. And I think that is something that we’re seeing in Russia.”

Video posted on social media appears to show Ukrainian troops have retaken territory from Russian forces near the northern city of Chernihiv.

A number of Ukrainian forces are seen in video filmed in the village of Sloboda, about 12 miles (19 kilometers) from Chernihiv.

The video has been geolocated and its authenticity verified by CNN.

The footage shows a bombed-out, enflamed Russian tank. Thick white smoke is seen in the streets of the village, in addition to Ukrainian forces.

Some context: Chernihiv, located about 90 miles (145 kilometers) northeast of Kyiv, came under “colossal attack” Wednesday, according to the city’s mayor. Strikes also continued in the Kyiv suburbs, just a day after Russia claimed it was scaling back its military campaign near the capital and surrounding area. Russian advances on Kyiv and Chernihiv had already stalled before Moscow’s announcement.

Russian President Vladimir Putin has massively misjudged the situation in Ukraine and some Russian soldiers have refused to carry out orders, according to the head of British intelligence agency GCHQ.

Speaking Thursday in Canberra, Australia, GCHQ director Jeremy Fleming said, “it increasingly looks like Putin has massively misjudged the situation. It’s clear he misjudged the resistance of the Ukrainian people.”

Fleming said Putin overestimated the abilities of the Russian military to secure a quick victory.

“We’ve seen Russian soldiers — short of weapons and morale — refusing to carry out orders, sabotaging their own equipment and even accidentally shooting down their own aircraft,” he said without specifying when or where this took place.
“Even though we believe Putin’s advisers are afraid to tell him the truth, what’s going on and the extent of these misjudgments must be crystal clear to the regime,” he said.

Mercenaries in Ukraine: Fleming said it is “clear” that Russia is using mercenaries and foreign fighters to support its forces — including the Wagner group.

“The group works as a shadow branch of the Russian military, providing implausible deniability for riskier operations,” Fleming said, adding that Wagner is now prepared to send large number of personnel into Ukraine to fight on the Russian side.

“They are looking at relocating forces from other conflicts and recruiting new fighters to bolster numbers,” he said, “These soldiers are likely to be used as cannon fodder to try to limit Russian military losses.”

China’s role: Fleming said there are risks for Russia and China associated with the two countries aligning too closely on the Ukraine conflict.

“Russia understands that long term, China will become increasingly strong militarily and economically. Some of their interests conflict; Russia could be squeezed out of the equation,” he said.

Negotiations with Russia are ongoing but are “only words,” Ukrainian President Volodymyr Zelensky said in a video message posted to social media on Wednesday night.

“Yes we have negotiations process but they’re only words, without anything concrete,” Zelensky said.

Zelensky also said the “alleged pullback” of Russian troops from Kyiv and Chernihiv is not a retreat but a result of the work of the Ukrainian military.

“There are other words about alleged pullback of Russian troops from Kyiv and Chernihiv, and reduction of activities of the occupiers in these territories. This is not a retreat, this is the result of the work of our defenders, who pushed them back,” he said.

Donbas on alert: Zelensky said Russian troops are concentrating in the Donbas region for new attacks, adding Ukrainians are “ready for this.”

“We will not give anything away and we will fight for every meter of our land,” he said.

Biden call: Zelensky said he had an hour-long call with US President Joe Biden and thanked him for an additional $500 million in aid for Ukraine.

Zelensky said the support of the US is crucial for Ukraine, adding, “If we want to fight for freedom together — then we ask our partners to help and if we are really fighting for freedom and protection for democracy ourselves, we have all rights to demand help in this crucial difficult moment. We need tanks, warplanes, artillery… Freedom has to be armed no worse than tyranny.”

According to the White House, Biden and Zelensky “discussed how the United States is working around the clock to fulfill the main security assistance requests by Ukraine, the critical effects those weapons have had on the conflict, and continued efforts by the United States with allies and partners to identify additional capabilities to help the Ukrainian military defend its country.”